We heard that there were a bunch of sea lions in the harbour in Cowichan Bay so on Saturday afternoon we went for a drive to check them out. We pulled in to town and part of me didn’t think we’d actually see anything.

But we walked out on the docks in the harbour and we started hearing them barking and zig-zagged our way to a small crowd of people and to our amazement, saw probably 20 sea lions lounging on the dock across from us!

There were a few really large males, I couldn’t believe how big they were.

We didn’t bring our camera so these were taken on our iPhones and unfortunately, due to the distance, it was hard to get a really good shot of them. 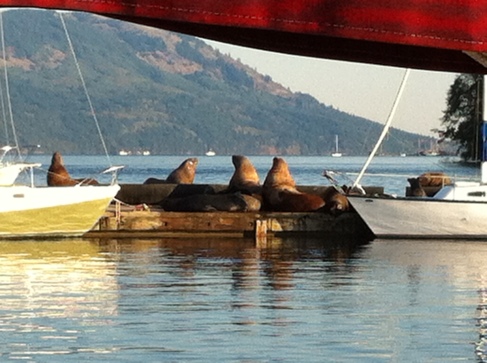 We also took a video to capture the sound they were making. A lot of the noises are very guttural and hard to pick up, but the barking sounds are a lot easier to distinguish.

And that night, when we were relaxing on the couch, Stanley decided he wanted to cuddle with Kirby and every time Kirby tried to move him off he’d just come back and cuddle closer and closer. Eventually, he ended up like this…..

It was too cute, I had to take a picture and share.

This entry was posted on November 11, 2012 by gabandkirby.