This summer we tossed around the idea of doing a few different road trips for our vacation but, in the end, we decided to keep it frugal and simple and to go to Goderich for the Celtic Roots Festival. Bill and Sylvie have been involved with this festival for many years now and I hadn’t been in 15 years so I was excited to be back.

We left Ottawa on Wednesday morning and headed to Kingston on the backroads. It’s been 6 years since Kirby and I were last in Kingston so pulling in to town had an odd mix of familiar and strange.

One thing is for certain, driving through the stormy town made us both want to go back to school.

We left Kingston along Bath road and headed for the Glenora Ferry and Prince Edward County in the rain. The blurry stacks you see in the picture are from the Ontario Power Generation plant I worked at during the summer of 2007.

The weather was beautiful when we got to the Glenora ferry and it gave us hope that we wouldn’t be camping in the rain. 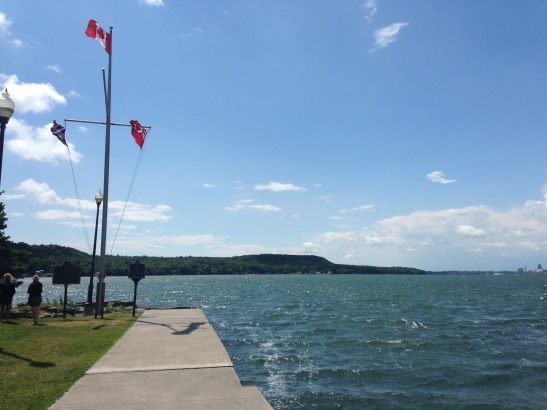 Once we got to Prince Edward County we started driving around looking for a picnic table to eat lunch. We eventually found this gorgeous spot on the lake in Wellington. It was incredibly windy and it rained on us a bit, but the view was too nice to leave.

After our picnic lunch we stopped in at Hillier Creek Estates & Winery to pick up a host gift for John and Connie.

It was a lovely winery and their wine tasting consisted of 3 samples for $1. A deal I couldn’t pass up on. They also had a lovely display of local artists. I would certainly recommend checking it out if you are ever in the area. 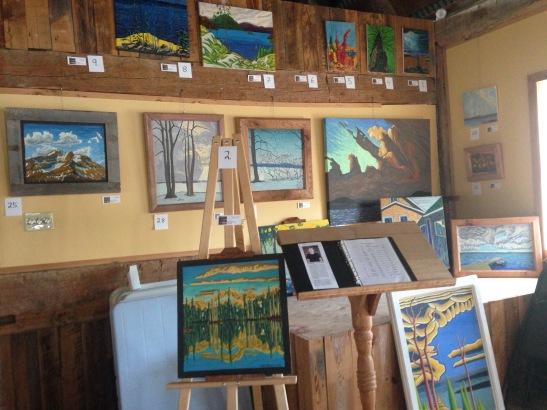 After we left the winery we headed to our campsite at the Presqu’ile Provincial Park. The weather stayed clear and after setting up our tent we went on a beautiful walk through the wetlands that boarder the park. 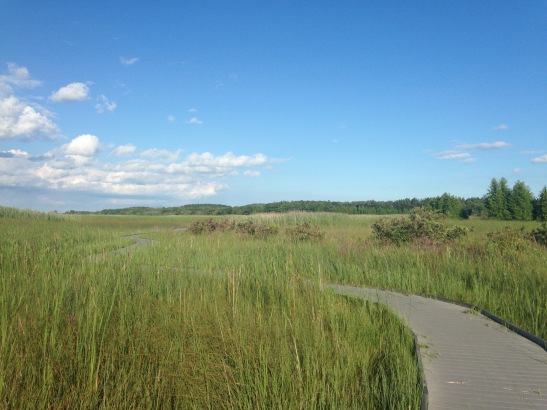 That night, after maybe an hour of being asleep, we woke up to the sound of our garbage bag being ripped down from where it was hanging on the picnic table. After briefly conferring with Kirby it was agreed that it was likely just a racoon, so we continued to lay in the tent, clutching the sleeping bags up to our chins. The next sound we heard was of a plastic deli container being wrenched open by tiny little hands which, much to their disappointment, contained only the remains of my caesar salad inside. After the eruption of romaine lettuce and grated parmesan settled, clearly not the feast they were expecting, they moved on. As we lay there in silence, waiting for their next move, Kirby conceded that if it went for the cooler (which we also forgot to put away) that he would get up. Well naturally, after receiving that tip, the furry little bandit beelined for the cooler and we could hear a little thump of the lid being lifted up. It’s at this moment that my hero jumped in to action wielding nothing but car keys and his crafty street smarts (after struggling with the fly for about 2 minutes where he kept opening and closing the same window in the fly after repeatedly mistaking it for the door – an honest mistake in the dark). Needless to say, this gave ample warning to our furry visitor that the jig was up and he was long gone by the time Kirby emerged from the tent and put everything in the trunk of the car.

The next morning we tried to light a fire to cook breakfast and due to some wet wood and newspaper, we were forced to sacrifice one of our many maps of Washington and Oregon to get the fire going.

After breakfast we hit the road and headed to Goderich. We had a lovely drive through the farmlands West of Kitchener and rolled in to John and Connie’s around 4:30pm on Thursday. We set up our tent in their yard on what is probably the most beautiful camping spot I’ve ever had.

It was really nice to hang out at their place Thursday night and Friday. Below is Bill, Kirby and John enjoying one of the many games of bocce that were played.

On Saturday we had lunch on the square, grabbed a pint with Larry and Hollis at the Park House then headed to the Celtic Festival.

It was really great to wander around the vendors and some of the side stages with Kirby and Hollis. I even had a chance to do some Irish dancing with my dad and Sylvie, something I haven’t done in years. It was a lot of fun.

Saturday afternoon we watched the main stage bands until about 11pm and one of my favourite acts was this duo called Maeve Gilchrist & Nic Gareiss. Maeve is a harpist originally from Scotland and Nic is a dancer from Michigan who dances on sand which adds a percussive sound to the harp music. Here is a short clip of their performance.

Kirby enjoyed an earlier performance by the Andrew Collins Trio and I also quite enjoyed a performance by The Young’Uns. All in all, we really enjoyed our trip and our time at the Festival and I think we will try to make it back.