We left Ravello at 7am and started our gruelling 5 hour journey on winding roads through the hills towards Rome. Because our transportation to Rome was part of the organized trip we booked, and that we decided to tack on an extra day in Rome ourselves, the bus brought us to the airport. Once at the airport, we found a driver to take us to our hotel and then finally arrived in the heart of Rome. We got a quick lay of the land and headed off to find lunch. By this point, it was about 2:30pm and we were both pretty exhausted and hungry and I was finding Rome to be a bit loud and stinky and dirty. I think the transition from the idyllic Italian countryside to the big loud city was harder than I expected. However after we ate lunch, we bought tickets for a hop-on, hop-off bus and began our tour of the city.

Rome is beautiful. I had a hard time wrapping my head around how old this place is and I really enjoyed kicking back in the bus and taking pictures through the window. It was a very hot day and we were both too tired to try and fight the crowds to see any specific attraction, but I was mesmerized at every turn. 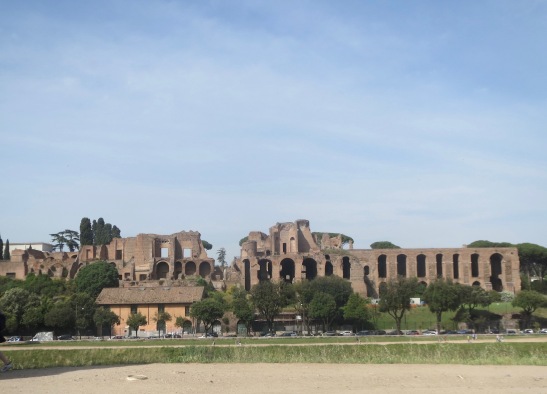 Above is the Circo Massimo, an ancient Roman chariot racing stadium that was also used for gladiator fights. Below is Il Vittoriano in Piazza Venezia.

I was also really taken by the Fontana del Tritone.

After almost 2 laps we got off the bus and decided to wander Rome, do a little shopping, and find our way back to our hotel. We had a nice time exploring the city on foot and taking in the sights.

We were in bed pretty early that night and we made our flight home without incident.

However, before I finish my last Italy post, there are a few other odds and ends I’d like to share. I don’t travel a lot and there were some things that caught my eye. For example…

… the toilets. I know this is a common North American observation when travelling abroad, but I saw a lot of different approaches to plumbing. For example, in the first hotel we stayed at, the tank for the toilet was mounted high on the wall and had no lid. This meant that if you flushed the toilet before the tank could fill back up, you’d get a nice short shower if you didn’t get out of way in time.

Also somewhat humorous about this bathroom is the spare roll of toilet paper was kept high up on the wall, near the tank. Which made it tricky if you happened to notice too late that the roll was empty.

Speaking of toilets, I should take a moment to talk about how great the food was.

The homemade pasta was divine.

And the tomatoes tasted rich and unlike anything I’ve ever had. So anything we ate with tomatoes instantly tasted incredible. Including the panini.

We had been led to believe that the giant lemons found near Amalfi were a sweet variety and mom was very excited to try them.

Turns out we’d been deceived.

It probably won’t surprise most of you to know that I spent a good part of my time looking at cats, following cats, photographing cats, feeding cats… There was an adorable cat who lived in a park in Sorrento and much to my mother’s chagrin, it took a real liking to her.

When we ate our picnic lunch in Torello there was a skinny little cat that came to visit us. Unfortunately the only thing I had to feed him was an olive. He ate it. So then I tried to feed him a second one. But he just walked away.

But the best cat I saw on my trip was on the island of Capri. Right in the middle of lunch, with a few hundred tourists wandering around the main Piazza in Anacapri, I spotted this little fella passed out next to a clothing stand.

And yes, I did nudge him to make sure he was still alive. He was just veeeeeery sleepy.

Lastly, I have to say how much I loved the ceramics. And not just what was sold in the shops (although I did like it very much, I just didn’t trust myself to get any home in one piece). 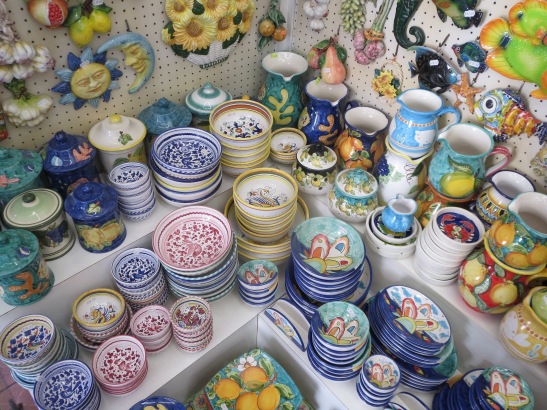 But I really liked the street names and directions in ceramic.

And almost all of the houses had a pretty number and decoration. 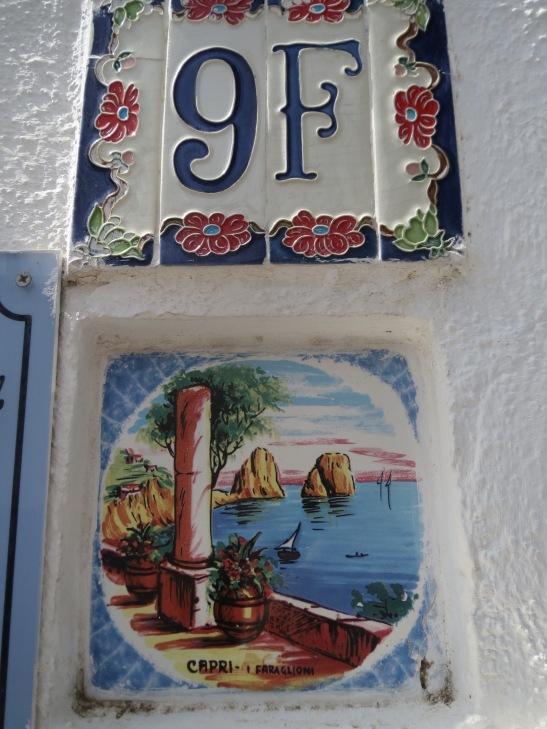 I like this one above the most. It reminds me of why I wanted to do this trip to begin with. Yes, I wanted to see Italy. But mostly, I wanted the experience of me and my mom against the world. And that, is something that is truly priceless.