This Thanks Giving marked the 50 year wedding anniversary for Don and Elayne. It was the perfect excuse for the whole family to get together.

On Friday morning we arrived at the Ottawa airport with enough time to grab a bite to eat before our 6:10 am boarding call. We were enjoying our leisurely Tim Hortons breakfast, when all of a sudden we heard “final boarding call for West Jet flight to Calgary.” So we jumped up and started half heartedly jogging/speed walking in what we thought was the direction of our gate. However, as we approached the end of the corridor, Kirby realized we’d gone in the exact opposite direction. So we turned around and amped up our speed walking/trotting efforts and headed in the right direction. As we approached our gate we realized no one was left in the waiting area and this very concerned West Jet employee was looking in our direction. With great excitement and relief in her voice she reaches out to Kirby and says “are you Kirby!?” And when he responds in the affirmative, her face lights up and she turns to the other West Jet employees and exclaims “Kirby is here!!” And then they all rejoiced as though their saviour had arrived and in the background I’m jumping up and down waving my boarding pass, trying to be heard “I’m here too! Gabrielle is here too!” To which all I got was confused/dirty looks that seemed to say  “who are you” and “why are you trying to take away from this moment?” And then we were quickly ushered on to the plane.

We arrived in Calgary just after 9am and it was snowing! We couldn’t have been more pleased. I haven’t seen the prairies in the winter in a long time and it made the scenery that much more beautiful.

We arrived at the Tarzwell family home and had a nice lunch, played some cards and caught up.

Late that afternoon Heather arrived with her family from Rosetown Saskatchewan (Dean, Emerson and Kane). And not long after, Bryce arrived with his family from Morinville Alberta (Marcie, Sayler and Kable). Then we sat down and had a nice family dinner.

We woke up Saturday to the world covered in ice. It made for beautiful pictures, but not everyone was impressed.

After spending the morning and lunch time with the parents, we went back to the hotel to get dressed for the family photo.

Then we all met up at the college in Olds and took turns having our pictures taken.

The photographer was very nice and she did quick work of getting some really good family photos.

Here is Elayne and Don looking lovely on their 50th anniversary. 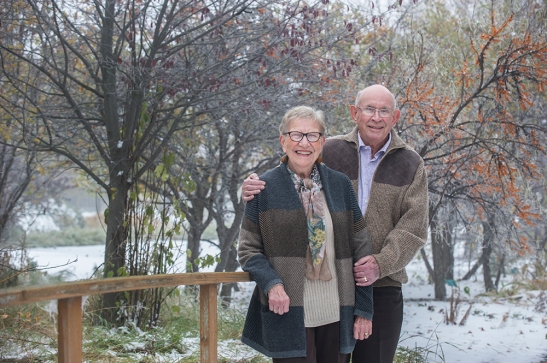 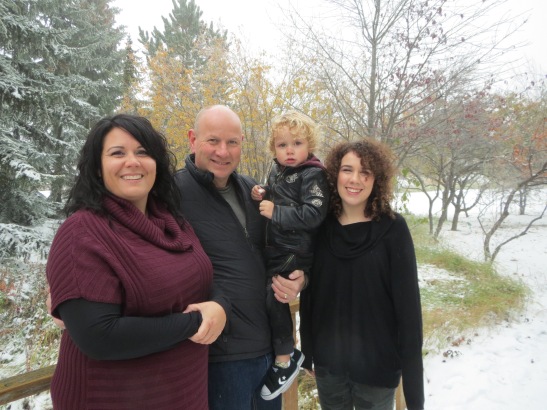 And here is Emerson, Dean, Heather and Kane.

That evening we went for a very nice meal at a restaurant in Olds.

On Sunday morning, Kirby and I picked up Emerson and Sayler and headed out to Banff. It was a bit overcast, but it made for really nice pictures. I was completely smitten by this grain elevator and must have taken a picture of it every time we drove past it. 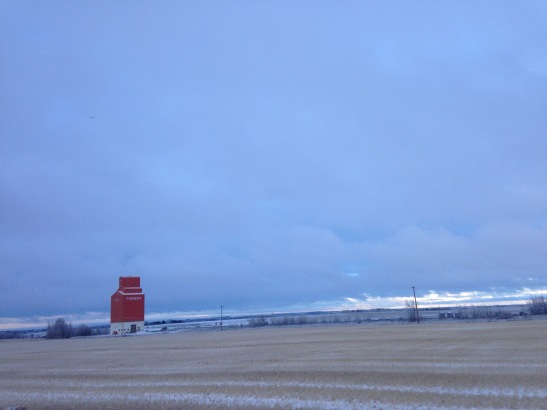 As we left Didsbury, the landscape gradually transformed from stretching prairie…

…and eventually the mountains starting peeking through.

Somewhere between Exshaw and Canmore we came across a small band of ewes and lamb bighorn sheep. 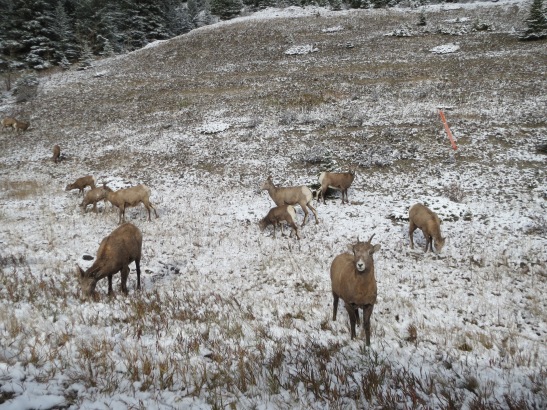 They blend in so well with the landscape, it would be easy to miss them.

We stopped in Canmore to see if we could find Kirby’s friend and then grabbed some Starbucks while we were there. I then forced everyone in to a selfie to commemorate the moment.

When we got to Banff we drove around a bit to get the lay of the land, then stopped at the Banff Springs Hotel so I could get a picture of the girls.

After we parked the car in town, our first stop was the church where Heather was first married. Here is Emerson in front of the church.

Then we wandered around Banff, went in some shops and grabbed lunch.

On our way home the clouds lifted a bit and we got a great view of the mountains.

That evening Don and Elayne made a delicious Thanks Giving dinner and we enjoyed our last family dinner of the weekend.

We had such a great weekend and it was really lovely to meet and get to know this family better.

This entry was posted on October 23, 2016 by gabandkirby.